One of the charming quirks about living in Singapore as an expat is the way the locals here seem to have this unrelenting love for the kind of snacks that, to most western tastes anyway, are pretty much the opposite of what would constitute a desirable snack.

Take some of the traditional desserts, for instance. Ice Kachang, crushed ice mixed with syrup and evaporated milk, sounds yummie enough. Until you get to the bottom of it, which is where you'll encounter corn kernels, beans and a kind of less than tasty looking jelly. To many western outsiders not quite your dessert favorite.

There's a brand of popcorn that have taken exotic snacks to a new level. Eureka Snacks is a popcorn brand, originally from Malaysia but now quickly gaining a lot of traction in the rest of South-East Asia, especially Singapore, is by local standards said to be the very definition of addictive. In fact, they've been bombarded gourmet popcorn by connaisseurs... 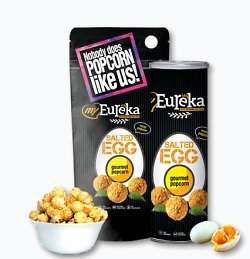 With fluffy, preservative-free kernels that are rounder and more evenly coated than those at your usual concession stands and in the cinema, each bite is said to be a burst of flavor that you can munch on without having to put an entire handful into your mouth. And to be fair, the flavours we sampled are indeed a cut above most run-of-the-mill popcorn you get from the supermarket, including microwave popcorn. None of these can hold a candle to the Eureka Snacks flavours we tried.

So, if you’re a fan of the classics, we recommend trying the original Sea Salt or even the BBQ. We even loved the Sour Cream and Onion, Cheese and, yes, even the Tomato flavour. We can kind of see why this could be a nice change from the traditional sweet popcorn. 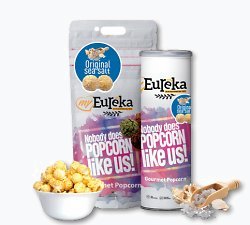 But as far as we're concerned, you need to be either a local or a pretty intrepid expat if you can't wait to sink your teeth into some flavours of the “Oriental” range.

For example, Seaweed popcorn anyone? How about Wasabi? Salted Egg? And Spicy Cuttlefish. We kid you not. And no self-respecting local foodie would not be all ga-ga over Eureka Snacks Durian popcorn.

As for us, four words: To each his own :) But hey, vive la difference!

They call these the "Heritage" line of Eureka Snacks flavours. And they also include such irresistible snacks as White Coffee, Curry and Seaweed. Locals call these "shiok", Hokkien for delicious. 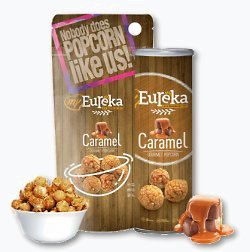 Well, call us boring, but our adventurous streak ends at the Dark Choc and Butter Caramel flavours for now. Then again, who knows, maybe the seasoning used for the Oriental and Heritage popcorn are an acquired taste. Time will tell.

And let's face it, the fact that there's no preservatives, transfats or GMO in Eureka Snacks is a huge thumbs up, whatever your preference. That, plus the fact that they're home-delivered when ordered online.

What our customers say...

Thanks to Esther and Bryan, we were able to move into our new apartment within a week of arriving in Singapore.

Your communication and attention to our needs is greatly appreciated. I'll most certainly be referring you to others who are relocating to Singapore.

Esther, your service is unreal, there's no way I could have found a home this great without your help.

We took less than a week to find us a lovely home and complete all formalities.

You've played a huge part in making our experience of moving abroad a hassle free and pleasant one.

I'm very impressed with your rapid replies. Your website is also fantastic.

I would like to thank Bryan and Esther for their efforts in helping me to relocate my family to singapore.

Bry and Esther, you're doing a great job for expats from Holland and elsewhere. I'm pleased to recommend your service.

I would recommend Esther to everyone. Give her a call. I am sure she will more then help you as well!

We found Esther to be professional, accommodating and knowledgeable. Esther explained the Singaporean rental process and requirements accurately

Any questions, inquiries, feedback? We're keen to hear from you.